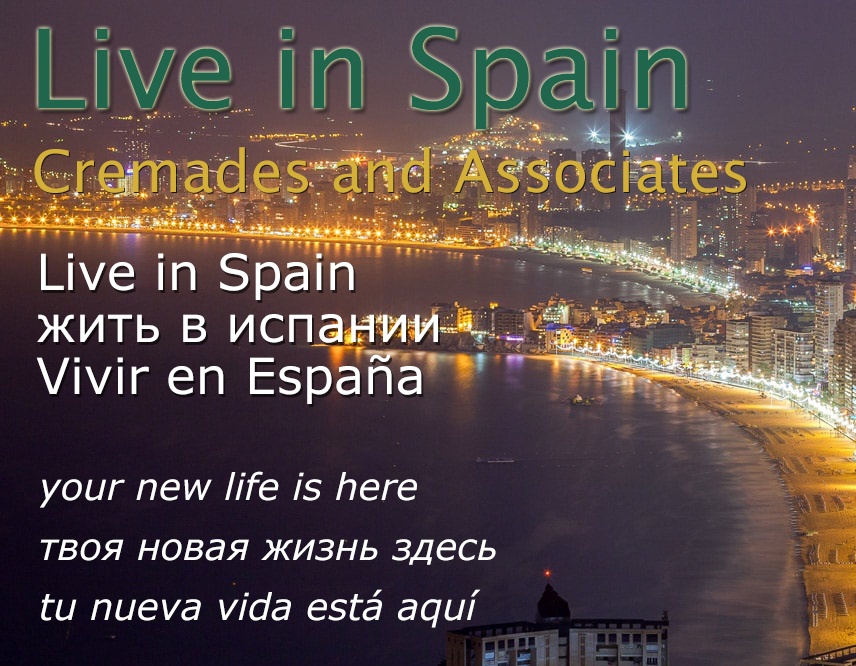 If you want to establish your residence in Spain, count on us

We assist you in Visa management, residence permits in Spain, family reunification, asylum…

“Cremades & Associates help you in your immigration affairs”

This procedure authorizes you to live in Spain for one year and can be renew for two years.
The non lucrative residence visa has to be filed at the Spanish Consulate of your country of origin or residence.
In order to have the visa granted, you have to meet a number of requirements that must be tested in consular headquarters: criminal record clearance, hold health insurance, lack of the diseases established by the WHO: 2005 and, most important thing, to have sufficient financial means.

This proceeding authorizes you to live and work in Spain for a period of one year to operate your own business or company.
To obtain the residence visa you must meet a series of requirements and documentary proof that you have proffesional expertise or business practice, that you have made a sufficient financial investment and a business project.
As well,  you should not have a criminal record, must hold a health insurance operating in Spain, lack of diseases established by the WHO: 2005 and most importantly have sufficient financial means to live.

Residence and work permit for workers

This procedure authorizes you to live and work in Spain on behalf of a company or employer.
The procedure starts in Spain and is filed at the corresponding Immigration Office by the representative of the company or employer.
Once the initial authorization has been obtained, which has examined, among others, the professional capacity of the candidate, if he has passed the National Employment Situation and proven the economic capacity of the employer, the foreigner will have to go to the Spanish Consulate to request the pertinent visa.

This procedure allows the relatives of a foreign citizen to reside in Spain during the period of the authorization of the family member.
The spouses or registered or analogous couples to the applicant, minor children and those of legal age dependent, and ascendants older than sixty-five years or exceptionally less, for humanitarian reasons, will be able to obtain the authorization of residence for family reunification. Spouses and couples will also get authorization to work.
The procedure is initiated by the applicant before the Immigration Office of his place of residence. Once the authorization has been obtained, the reunified family member will have to apply for a visa at the Consulate of Spain in their country of origin or residence.

This procedure is granted for exceptional circumstances for one year renewable to another year.
When the foreigner has lived in Spain irregularly in Spain for three years and has a formal job offer, he can apply for residency in Spain under exceptional circunstances by social root.

This procedure is granted for exceptional circumstances for one year renewable to another year.

When a foreigner works in Spain without a work contract  and therefore without the mandatory registration in the TGSS and holds an act of the Labor Inspectorate that proves the above, he / she will be able to regularize his / her situation in Spain provided that he / she has irregularly lived in our country for two years.

This residence and work authorization will be granted to parents of Spanish minors or children of a father or mother originally from Spain.

Women who have been victims of gender violence in Spain who can provide a protection order or a report from the Public Prosecutor’s Office and who are in an irregular status may obtain residency in Spain through this procedure.

We can help you obtain a tourist or business visa, as well as assist you in contracting insurance, opening a bank account...
Visit Spain

“Cremades & Associates apply for nationality on your behalf”

Spanish citizenship can apply for those who have resided immediately before the petition in a continuous legal manner in Spain.

A citizen married to a Spaniard may apply for Spanish nationality after one year of marriage.

The Spanish civil code establishes that they will be Spaniards of origin:

In the same way that the children of Spaniards, the minors adopted by Spanish parents, will be Spaniards of origin.

Spanish citizenship may be chosen, those whose adoption has been made after the acquisition of the age of majority, which must be done within 2 years of the aforementioned adoption.

Also eligible for Spanish nationality, those whose filiation has been determined once acquired the age of majority and those subject to the parental authority of a Spaniard.

Those Sephardic Jews who can prove such a condition may apply for Spanish nationality without having to prove residence in Spain or renounce their nationality of origin.

When a foreign citizen behaves as a Spaniard continuously for at least ten years, in good faith and with a just title, exercising rights and obligations may acquire Spanish nationality.

The acquisition of Spanish nationality by this means is due to reasons of a humanitarian nature, public interest, etc. It is the most discretionary way of obtaining Spanish nationality as it will be granted by Royal Decree by the Minister of Justice.

Non-EU relatives of a citizen of the European Union may obtain the residence and work card for a period of five years in Spain, renewable.
In order to obtain this type of card, the family bond must be accredited, whether they are spouses, spouses or analogous to the spouse, descendants and ascendants of both the community citizen and their partner, and extended family.